Many of our new pages are under construction.  Please come back soon.

For any question please send us a message to contact@pc-q.co.uk

We are an independent Internet Service Provider (ISP) based in the UK.

We provide premium-level zero-contention services, meaning peak time simply doesn’t exist for our customers, speeds are always consistent, regardless of the time of day. We provide rapid, 24/7 support, dealing with real people whether on the telephone, via email or live chat via our website.

Our services operate from more than 40 points of presence scattered across the UK allowing us unrivalled access to Openreach’s infrastructure as well as other carriers.

PCQ can supply ADSL, FTTC, FTTP, FoD and Leased Line to any point in the UK, so no matter your location, we can connect you.

If you’re unsure of these acronyms, please get in touch and we’ll be happy to explain. 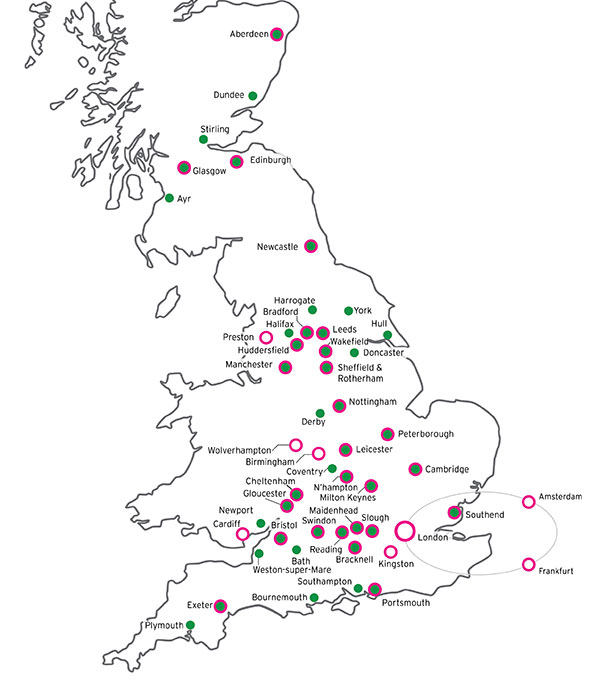 Our NOC, (Network Operations Centre) is manned 24/7. Our team keeps an eye on the entirety of our network, making sure that it’s at optimum performance.

Updates regarding network maintenance are issued by NOC with plenty of notice so that you can keep informed, if there is an incident, our NOC team will let you know about that too.

Please see below for brief explanations of each technology

Commonly known as the original “Broadband” – Asymmetrical Digitial Subscriber Line has been around for a while now, whilst revolutionary in it’s time, it’s maximum speed of roughly 24Mbps and reliance on twisted-pair copper phone line means it’s being very rapidly phased out in favour of faster, higher-performance services.

There is still room, however, for this type of service, for those unable to currently get better services. This type of connection will require an active phone land line.

VDSL, or as it’s known in the UK: FTTC/Fibre to the Cabinet, is a common method for connections in urban areas, as it allows for the existing copper telephone lines to still be used. Speed is still limited to under 100Mbps, but is still miles faster than ADSL could ever offer. Also referred to as “Superfast”.

This type of connection will also require an active phone land line.

Fibre to the Property/Premises is the gold standard in current connectivity. Utilising high-end fibre-optic technology from node to home, speeds of up to 1000Mbps (AKA Gigabit) are becoming increasingly commonplace. Commonly known as “Hyperfast”.

This type of connection uses its own technology and does not require a phone line.

Fibre-on-Demand (FoD) delivery on demand. Can be installed in some locations where areas have fallen outside of scope.

Leased Lines are the best possible form of data delivery (internet) currently available. Speeds from 10Mpbs to 10,000Mpbs up and down matched – speeds are guaranteed, faults also include a 4-hour SLA – this is serious internet.

Running low on anything? Paper/card/pens/inks/accessories? Order and get free home delivery (within 5 miles)

Running low on anything? Paper/card/pens/inks/accessories? Order and get free home delivery (within 5 miles)

PCQ Covid-19/Firebreak service status - Always there to support you!

Regardless of your needs, let us know and we will do our best to help you.

Over 1,500 products and growing every week.

Free delivery within 5 miles (mostly same day!)
Small fee for shipping anywhere else in the UK 🙂

Great service from the team at PC-Q

COVID-19 Firebreak. Our retail shop is closed to the public until 9th November, however, you can still order online and by phone. Our webshop contains over 1,500 of our most popular lines, please phone or email if you cannot find what you are looking for. Free delivery within 5 miles available (often same-day) and a small shipping fee for anywhere else in the UK. Please phone if you have any questions/concerns. Support services all still available.

More information and to check our service status click here
We use cookies to ensure that we give you the best experience on our website. If you continue to use this site we will assume that you are happy with it.OkRead more